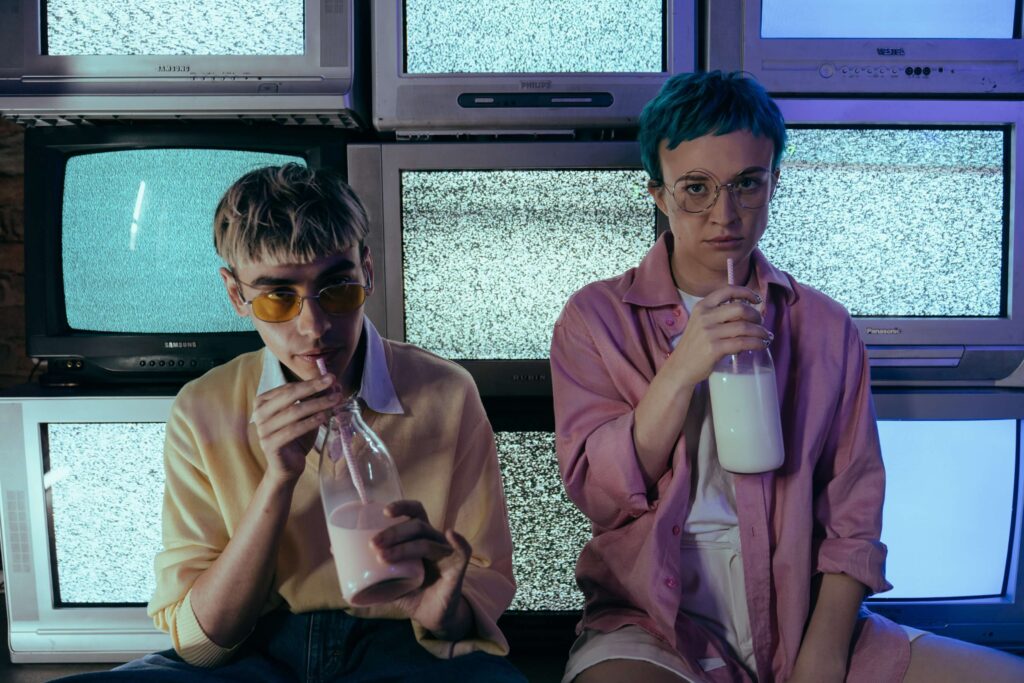 TV is not enough. What’s the next-generation viewing experience?

Television is now 100 years old! The evolution of TV has come a long way since the very first Octagon TVs of the 1920s with a resolution of a mere 100 lines. The introduction of color TV in the 1950s was a significant advancement to make film look more real. However, when high definition resolution and flat screen LCD technology took over in the late 1990s, a huge leap forward to resemble “reality” even more convincingly was made. After about 80 years of broadcasting to consumers in one direction through a handful of channels, the gaining popularity of the internet at the turn of the century was really when viewers were given the power to choose beyond the traditional means as the world wide web became more widely available in modern households. After many decades of sending waves through the air transmitting video content to our TV antennas, terrestrial cable was the next medium to supply us with TV shows before the internet became the main pipe of video content delivery to our homes and beyond.

In the late 1990s, weekly TV shows like Seinfeld or Friends would dictate when we would gather in front of the TV. With the introduction of video on-demand TV, a revolutionary paradigm shift has taken place, largely due to new platforms appearing in the market, Netflix being one of the driving forces since the early 2000s. As we all know too well, over-the-top (OTT) content streaming has changed our watching behaviors. With on-demand services of various kinds, we now watch (and binge watch) our favorite shows when, how and where we like to. Whether that’s on our main TV screen in the living room, on our smartphone while commuting to work on the train, or even in a virtual movie theatre while wearing a virtual reality (VR) headset.

The information age of the 21st century has taught us that we have access to all information at all times through the internet. This is why you see viewers, especially younger generations, watch two screens at the same time. Our smartphone displays have become our companion screens, always on and always within reach to find out more about actors, products, and locations we see on TV. TV is no longer a passive consumption, it is becoming an active experience as we increasingly want to engage with the content we see. In 2018, Netflix released an interactive movie called Bandersnatch, as part of the British “Black Mirror” TV series, which gives the viewer the power to choose between different paths and outcomes of the story watched. In addition to the widely popular Bandersnatch, Netflix has published more interactive movies and series in multiple genres while focussing mostly on children for their interactive storytelling efforts as seen here.

Consumers want more. They want choice and they want to be entertained when it suits their needs and schedule. Twenty years of the internet have taught us to click on and engage with the content we see in our browsers. We are used to finding URLs below the videos we watch on YouTube to dig deeper on the content we watched or to act on the call to action presented to us. Other social media like Instagram for example has also taught us that we can click on links added directly on top of videos we see. As a result, the expectation of being able to take action on a video we consume is increasingly the new normal, especially for millennials and Generation Z.

Unique times require unique measures. As we have all gotten used to socializing via Zoom and similar platforms due to the pandemic and the need for social distancing, “Watch Together” is Yahoo Sports’ latest app feature enabling “co-viewing” amongst friends and family without meeting in person. In this case, COVID-19 accelerated innovation and new ways of watching sports together. The example shows how quickly the industry can react and adapt to new requirements. In this ever-changing landscape, the current names of the game are engagement, control, interactivity, personalization, and shareable experiences.

The power of the connectivity between the devices we use in our living rooms offers tremendous opportunity for new platforms and better TV experiences. The focus is especially on the very common situation we find in probably more than a billion households worldwide. In these homes, we have the co-existence of a Wi-Fi network, a TV connected to the internet – either directly, through an OTT box or via a dongle of some sort – as well as one or multiple connected smartphones depending on how many people you have in the room. Based on this setup, the nut that all video streaming players in the market are now trying to crack is to provide the most compelling “TV experience”. What combination of content, services, devices and features will convince the consumer to fork over those $7.99 / month for one provider but not the other?

Utilizing the co-existence of big screens and smartphones, Hulu stepped forward a couple of months ago by announcing the launch of a feature called “GatewayGo”, asking viewers to scan QR codes displayed on the TV screen with their mobile device to execute on the call to action of what was previously watched.

According to comments made by NBCUniversal at the beginning of the year, its new video streaming service Peacock will also be adding QR codes to merge the gap between the content you watch on your TV and the website it wants you to visit. But are QR codes really the best way to merge mobile and TV devices? Would you do this? 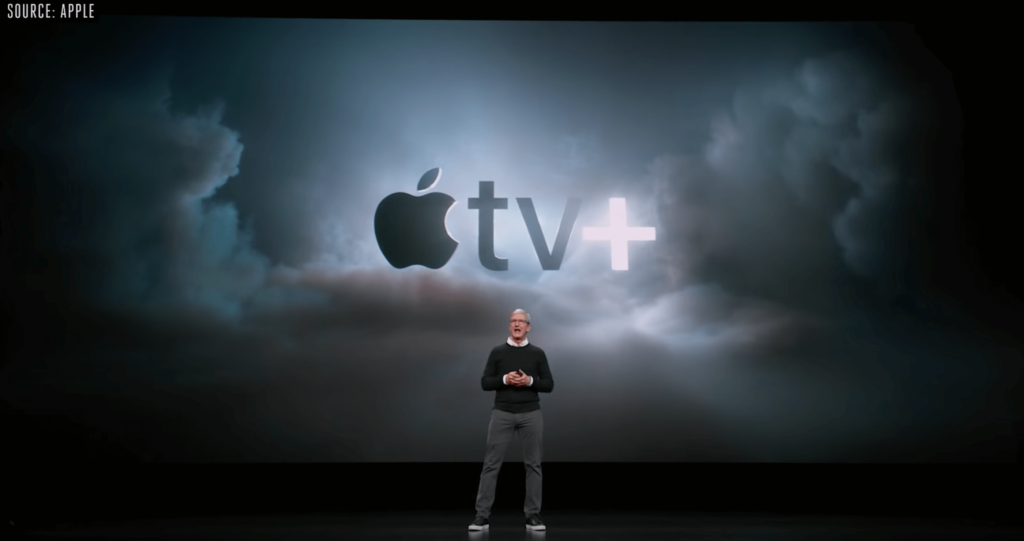 Apple is ramping up

With AppleTV, the world’s most valuable company has been in the OTT hardware business for 13 years now, while rumors on the development of an actual TV set had been floating around for a long time until coming to a halt a few years ago when it became clear that Apple abandoned these plans. Nevertheless, providing hardware with Apple TV and software with its proprietary operating system (Apple TV OS) and a video content service on top of it, Apple has demonstrated that it has a long-term interest in leading this market. Last year, Apple doubled down on it by launching Apple TV+, which is essentially an Apple controlled video content offering with exclusive Apple originals. Bundling Apple TV+ for 12 free months with every purchase of a new iPhone is enough evidence to understand how keen the company is on gaining subscribers for its video content service and to take on market share from its competitors like Netflix, Disney+, Amazon PrimeTV, Peacock and others.

But there is more. Apple TV Plus is reportedly getting augmented reality companion content to differentiate from its rivals. Augmented reality (AR) has of course been a key area of Apple’s interest for a very long time. Over the last decade, the company acquired multiple companies with intellectual property, technology, and talent relevant to building augmented reality products. The list includes companies like metaio, Flyby Media, PrimeSense, NextVR, and Spaces to name a few. In 2017 it launched its own AR software development kit (SDK), empowering thousands of apps to augment the world. The high probability of seeing many more products, services, and features utilizing AR seems undisputed, especially when Tim Cook, Apple CEO says things like: “…I am a huge, huge believer in AR. We put a lot of energy into AR. We’re moving very fast.”

And finally, Apple is ramping up to launch AR glasses. 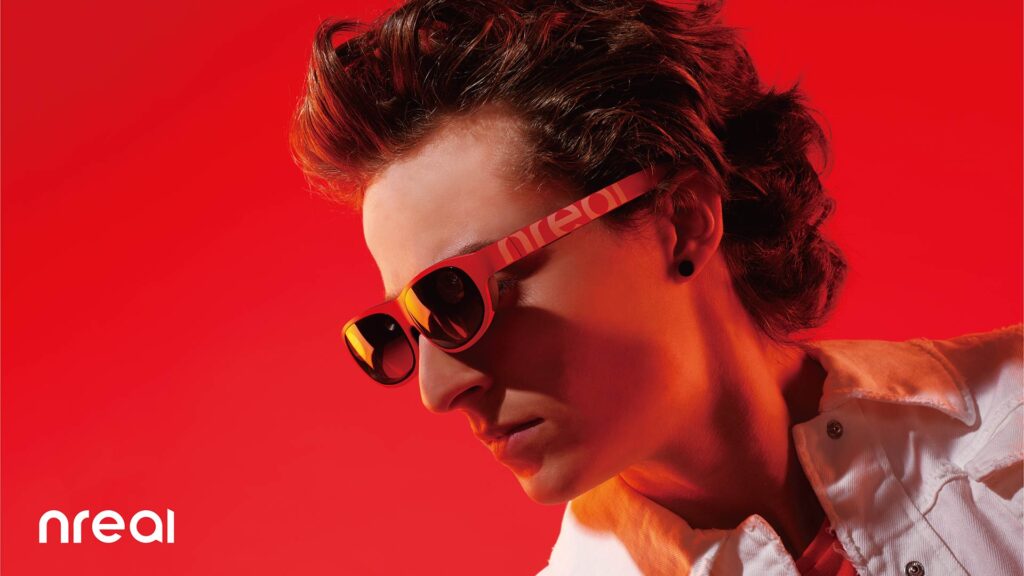 Displays are everywhere in our lives: TVs, computers, smartphones, and tablets are the screens closest to our hearts, literally. But even beyond our personal spaces, displays can be found in most modern retail stores, in and around transportation services as well as in urban public spaces for the purpose of advertising, entertainment, and information – New York’s Times Square probably being the best location to get a feel for this.

More displays in more form factors mean that we have more ways to consume video content when and where we like to. But what’s next? As alluded to above already, Apple has expressed a keen interest in augmented reality AND is looking for its next big product to replace the iPhone, or at least to mitigate its dependency on the iPhone as the dominating contributor to its bottom line. Although not officially confirmed, it seems certain now that Apple will launch augmented reality glasses anytime between 2021 and 2023. Having a display right in front of your eyes could be considered the holy grail in terms of being the easiest and most powerful hardware platform for watching video content – you don’t even have to pull out your smartphone anymore.

While Apple is still preparing to enter this product category, the Chinese startup Nreal has already launched their Nreal Light AR glasses to consumers in Korea. With Facebook’s confirmation that they are also working on consumer AR glasses and Google’s recent acquisition of North – another startup that had introduced consumer AR glasses to the market in early 2019 – we can rest assured that there is much more to come in the near future. 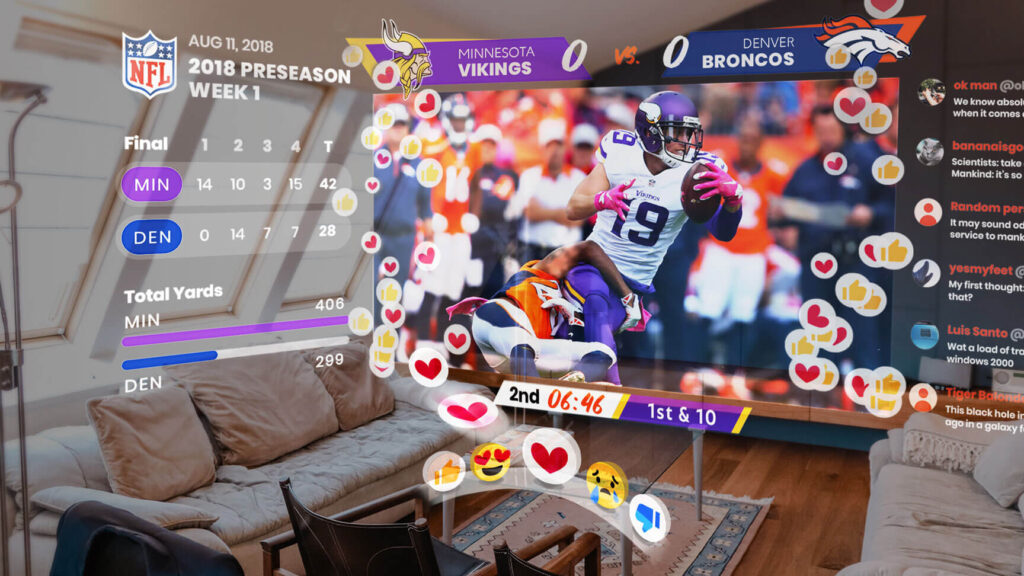 When it all falls into place

Connect your TV and your iPhone to the internet, launch Apple TV+ and then add augmented reality (AR) technology to the mix and you get your next generation, engaging, and immersive TV experience. That’s what Apple believes may be its secret sauce to differentiate itself from Disney+, Netflix, HBO, Peacock, and the rest of the bunch, according to this recent Bloomberg report. As versatile as our various displays are individually, it may be the power of building a visual bridge between our stationary living room TV and our mobile display devices with AR to deliver the most compelling viewing experience. With AR software technology on the rise, AR glasses on the brink of coming into our lives, and countless of new video on-demand service providers coming to market while Apple flexing more muscles in this industry (and Google watching closely for sure), this might be the moment in time when it all falls into place and the next generation of the TV viewing experience is defined.